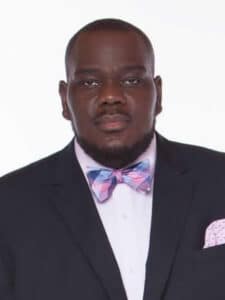 Dr. Emmitt Y. Riley, III is an Associate Professor of Political Science and Africana at DePauw University in Greencastle, Indiana. He also serves as the Director of the Africana Studies Program. Dr. Riley earned a bachelor’s degree in English and a bachelor’s degree in political science in 2008 at Mississippi Valley State University. He subsequently received a master’s degree in political science from Jackson State University in 2010. Dr. Riley continued his education at The University of Mississippi, where he earned a master’s and Doctorate of Philosophy in political science with a specialization in American Politics and International Relations in 2014. He is an expert in Racial and Black Politics. In 2018, he was named the 2018 Anna Julia Cooper Teacher of the Year by the National Conference of Black Political Scientists. In 2020, he received the Fannie Lou Hamer Award for Service from the National Conference of Black Political Scientists. His research investigates both the substantive and symbolic benefits of black descriptive representation. Dr. Riley’s research has sparked regional, national, and international interests. Dr. Riley has written several peer-reviewed articles and book chapters. His research has appeared in the Journal of Black Studies, Journal of Race & Policy, and the National Review of Black Politics.